If you are a runner then, Team JDRF is for you!

It was designed for runners of all fitness levels, Team JDRF Challenge is a partnership. Runners commit to raising a minimum dollar amount, and in exchange JDRF provides each runner with fundraising support and coaching leading up to and throughout the Race weekend.

Find an Event or Start your Own today!!

Thanks Gina, I hadn’t heard about that. Fundraising can be tough, but I do love running, and this is a really cool partnership. I’ve always been intrigued by the bike race (one of my cousins did it a few years back), but I just can’t bike–it’s absolutely miserable for me. I wish there was a T1 running race, but this looks like a pretty comparable thing!

I put this up with you in mind! I hope that it works out for you and helps you to find a team!

Just want to let people know that I will be doing the 107 mile bike ride in Tucson for JDRF. Check out my page and feel free to donate. Thanks! 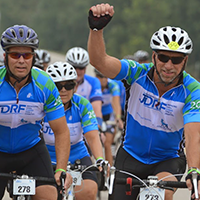 Join the JDRF Ride and help create a world without type 1 diabetes (T1D).

Check out this event with Team JDRF!

Imagine a weekend of runs where every mile is filled with Disney fun! Join us at the 2015 Walt Disney World® Marathon Weekend January 7-11, 2015, for a weekend of races that are magical as they are memorable. From Disney’s Health & Fitness Expo to running through all four Theme Parks in the Marathon, to collecting your medal from Mickey Mouse and his friends, you’d be, well, goofy to miss it!

Hey guys! I’m not sure if this is appropriate to put on here, but if not, please feel free to delete it, no hard feelings. I am a type 1 pump user who has joined Team JDRF for the Grand Rapids Marathon in Grand Rapids, MI, and will be doing several others in later months. I recently ran my first marathon in May, and felt really good…for about the first 21 miles. I remember the camera man at the 20 mile marker but don’t remember anything else until I came to in the medic tent. My blood sugar was 48. It dropped during the race and I apparently fell face first on the course twice, but I guess I wouldn’t let them get me to quit. I pretty much ran the last 5 miles completely blacked out. When I became coherent again, I had blood on my knees from falling and was covered in mud. The picture at the finish line, which I don’t remember, was of me crossing and a Dr. running next to me and a nurse running on the other side with a wheel chair. Pretty scary stuff! I have made some changes and since updated to a CGM system and will be doing my second marathon in October. Please if you can, drop by this page and make a donation. I’m trying to get people to donate just $1 and share the link/story with their friends and get them to donate as well. Thanks guys!

This is a great idea and I’d love to get started but I noticed that you do not show any Canadian races on here.
Any chance we could see some?
Thanks and great site btw

Alan T1 -41 yrs
(half marathon runner training for a full)

I got two questions as I am upping my running a little:

1 - does anybody here go into a run ONLY by decreasing/halting basal on a pump, and not by taking in carbs? Currently I run around 3-4k (getting back to 5), go in about 190-200, temp basal about 60% for 30 mins before and 30 after. It works, but I’m bored of having to take in carbs.
2 - For those who run longer distances, do you always have to take carbs in during the run?

Thanks in advance guys
al.

Is anyone still in this group.

Hope this helps and good luck!

i have found that they all differ too. i have one touch magnet on my fridge that says that an A1C of 7 means an average bg of 9.5 (171). Its hard to know but i think thats somewhat accurate. i calculated my own A1C and it turned out to be pretty similar to what my magnet said!

This one seems pretty detailed, not sure how accurate it is: http://healthy-ojas.com/diabetes/a1c-glucose-chart.html